When we began developing RAINBOW QUEST! several years ago, we imagined our game to be a dependable programming activity for Gay-Straight Alliances (GSAs) and community support groups. We didn’t realize that states would begin to include LGBTQ+ culture and history to their school curriculum contents, and we are thrilled for so many reasons.

Some Topics are Uncomfortable

As a long-time educator, I know that even when there are topics I am personally excited to teach, I’m not always comfortable doing so. As an openly gay professor of psychology and human development, any time topics of sexual and gender identity would arise, I felt I was walking a tightrope. Spend too little time on those topics, and students would think I was ashamed of my sexual orientation at best, or at worst, actively attempting to hide about myself. Knowing the importance of having LGBTQ+ role models, I was always upfront about coming out to each of my classes. Over forty years, I know from my students’ disclosures that doing so helped many of them to overcome their suicidal urges.

While being out and visible helps to create a safe space for queer individuals, it also makes out teachers easy targets for homophobic or politically conservative students. No matter how brief my coverage of LGBTQ+ topics, some students would complain that my entire classes focused on LGBTQ+ issues, and administrators took those end-of-semester course evaluation comments as if sworn oaths. From that experience, I understand entirely that even LGBTQ+ teachers and allies may not feel entirely comfortable or ready to meet the new requirements in those states that mandate queer culture and history across the curriculum. 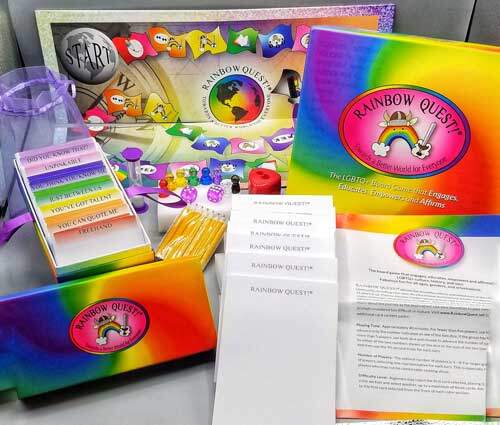 RAINBOW QUEST! is the perfect solution. As a learning activity, it creates a safe space for discussion and sharing of both academic content along with personal anecdotes related to sex and gender, and at levels appropriate for middle and high school use.

Using RAINBOW QUEST! in the Classroom

For example, the teacher(s) may choose to participate in the game along with their students. The game requires that you authentically share personal disclosures within your comfort zone, so you may filter as much as you need to keep it real while participating in creating a safe learning space, leading by example.

Where the optimal number of players is 8, teams of players may be grouped with multiple students on each team, with one at a time stepping up to the plate when the team’s turn comes around.

The game is so fun and engaging that a fishbowl experience can be exciting and entertaining. Just have eight players proceed at the front of the room while the others watch and learn. Next time, choose a different set of players until all have had a chance to play over the course of the semester.

Unlike some LGBTQ+ activities that are mostly like multiple choice trivia games, RAINBOW QUEST! is a whole-brain, multi-modal extravaganza that quickly dispels the awkwardness of discussing things that are usually avoided. Of the nine different challenges that players face while making their way from the bleak world towards a better world for everyone, only one, ‘Did You Know That’ is trivia-style. From my perspective, I don’t enjoy being hit on the head with endless trivia questions that make me feel ignorant. That isn’t fun! Also, in an age where expertise is fleeting due to constant needs to relearn and rethink perspectives as new information emerges, few people truly enjoy feeling ‘competent’ on any topic. For more on this, check out Alvin Toffler’s seminal book, Future Shock.

The ‘Freehand’ challenges include drawing a picture of some aspect of LGBTQ+ culture and history, while others try to guess what it is. ‘You’ve Got Talent’ allows the more outgoing, demonstrative students to do a charade depicting an LGBTQ+ topic. ‘You Can Quote Me’ presents a provocative quote, and students must select from two choices who made that statement. ‘Did You Know That’ offers trivia-style questions spanning centuries of LGBTQ+ accomplishments and contributions with three options from which students choose the correct answer.

The GLSEN National School Climate Surveys have repeatedly shown that schools demonstrating a commitment to their LGBTQ+ students have fewer attendance problems, higher standardized test scores, and lessened rates of bullying and suicide attempts. Those are pretty impressive outcomes for something as simple as showing support and respect.

We know that ‘pride’ in oneself comes from knowing who you are, which in turn is based in part on knowing ‘who your people are.’ For the LGBTQ+ community, this has been problematic (until now). Most of us continue to grow and develop in the shadow cast by centuries of religious dogma and social stigmatization. Gay people had been targeted as ‘security risks,’ excluded from military service, banned from teaching, and labeled by clinical psychologists as broken in need of fixing. Very little had been known about the heroes of the LGBTQ+ community because they had to either live ‘under the radar’ in the closet, or they were known to be queer. That aspect of their identity was not considered appropriate information in their biographical records. With RAINBOW QUEST!, these movers and shakers can be identified and serve as role models, allowing for a sense of authentic pride to affirm members of this vibrant community. 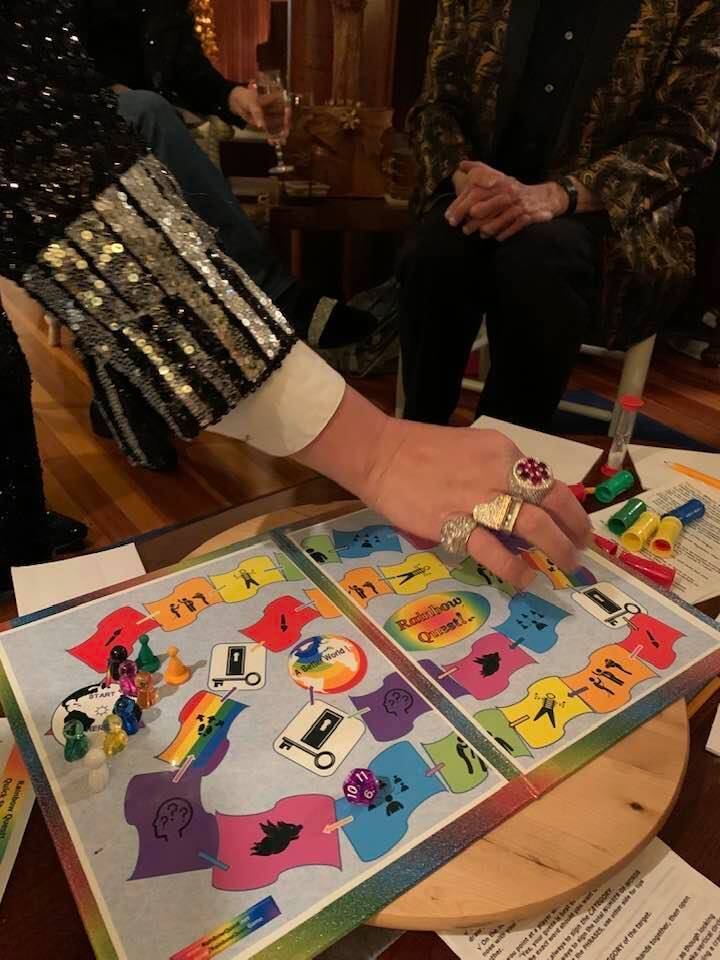 RAINBOW QUEST! encourages comfortable self-disclosures about things like coming out experiences, ruminations on personal life milestones and values, and celebrates players’ personal milestones. These additional elements of gameplay build both speaking and listening skills. A safe space is created where the less secure players find a voice, and the ‘cool’ students develop empathy when being exposed to the stories told to them. It is gratifying to see this all emerge, knowing that information is not only being shared but remembered.

Scientific Quantification of the Benefits

We’ve not yet had any scientific studies conducted on RAINBOW QUEST! to validate its benefits, so if you have an interest in quantifying the benefits of the game, we’d love to hear from you! The anecdotal information we’ve collected over years of testing and development suggests that playing RAINBOW QUEST! even one time boosts confidence, affirms identity, teaches ‘straight privilege,’ increases community cohesiveness, and ameliorates suicidal urges. We’d do the research ourselves, but we’d rather have an objective third-party establish these vital quantifiable benchmarks!

Any questions? Feel free to call us at 855-2RQ-GAME

In solidarity towards a better world for everyone, Brian Kaufman 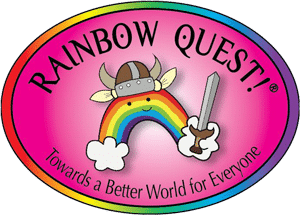